Brandy has gotten her hands on the Starbucks Iced VIA, here are her thoughts!

I was so excited to read that Starbucks now has Iced VIA! I order frappuccinos and iced coffee year-round, even if it’s 26 degrees outside. You can make regular Starbucks VIA® iced, but you have to be patient (which I’m not).

At first sight, mixing Starbucks VIA® Iced Coffee in the cold water made me a little nervous. Initially, a film surfaces while you stir and I wasn’t so sure it was going to dissolve, after all. I should’ve had more faith in Starbucks! The directions say to start with the cold water first; I disagree. It works much better if you pour the mix in the cup first and the water on top. Stirring with a spoon took longer than I’d hoped to dissolve the grounds. (Did I mention I’m impatient?) However, shaking the mixture in an enclosed container (like the VIA Shaker Tumbler, which comes complete with measurements on the side) works much more efficiently. Another trick (while not ideal if you’re truly “on-the-go”) is to use two cups and pour the coffee from one to another until it’s fully dissolved. Once dissolved, just add ice & you’re good to go! VIA comes lightly sweetened, but I prefer to add sugar and milk (and occasionally a little chocolate syrup for an iced mocha). And, the taste? Iced VIA does not disappoint. Each packet makes 16 oz. of coffee. A 5-pack box costs $5.95, but Starbucks and Starbucks.com are currently issuing $1 instant coupons, for a total of $4.95 per box. 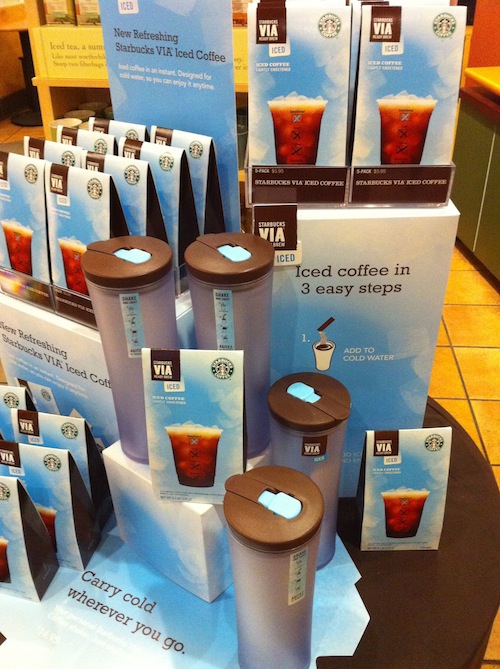 The Ember mug isn't just an insulated mug, tech keeps the drink at a particular temp