In a recent press release, Starbucks announced that, beginning at the tail end of August, it is releasing Galápagos San Cristóbal (a “medium-bolded” coffee), the first in a series of premium single-origin coffees called “Starbucks Reserves.”  Throughout the fall, Aged Sulawesi Kalosi, Fair Trade Nicaragua Corcasan, Brazil Sul de Minas Peaberry, and El Salvador Montecarlos Estate Pacamra will follow Galápagos San Cristóbal.  According to this fact sheet, Galápagos San Cristóbal is “a rare coffee from the unique subtropical climate in the Galápagos Islands that produces a limited amount of coffee each year.” Baristas brew Galápagos San Cristóbal via the pour over method or with a Clover coffee maker (Clover machines are currently available in more than 60 Starbucks stores, with more to come throughout the year).  Both methods will enhance and enliven the coffee’s rich and complex flavor over traditional drip brewing.

Starting August 31, if you’re fortunate enough to live in New York City, the San Francisco Bay Area, Los Angeles, D.C., Boston, Seattle, Portland (Oregon), Chicago, Dallas, Philadelphia, Atlanta, or Miami, you will be able to purchase Galápagos San Cristóbal in-store for an immediate fix or whole-bean by the half pound. The suggested retail price for a half-pound of these ultra-premium beans is $12.50; $2.95 will get you a freshly brewed Tall.  For comparison, 11 oz of Starbucks’ Natural Fusion flavored coffee comes in at $8.95 and the old standby Caffè Verona runs $10.95 a pound.

If you’re not lucky enough to live in those areas, you can purchase (as of August 17) the 8 oz bag online at www.starbucksstore.com.  On August 28, participating Starbucks Reserve stores will host special tasting events.

No advanced word as to whether Starbucks Reserve will see an incarnation as a VIA instant coffee drink, but with the increasing popularity of VIA and Starbucks’ willingness to innovate by continuing to expand VIA options (VIA Iced), don’t rule it out. 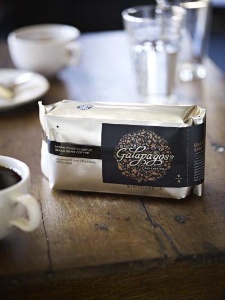