Last week I stumbled upon a fun bit of coffee humor art. We all know Owls for their big eyes. Well, how would those eyes look if our friends of the late night drank coffee or espresso? Not just one grind, but a variety of coffees. Maybe what makes it a bit more fun is I have co-workers with similar reactions to the many coffees available in the kitchen. 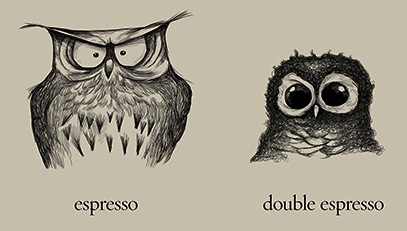 The above is just two of the full graphic, which is available from the artist to have printed. Making a nice gift for the coffee fan in your life. 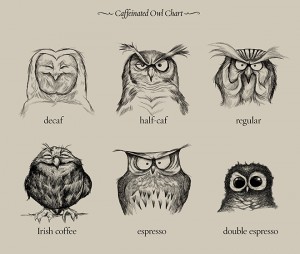 I just found a great article about Caffeine in coffee. The specialist author: Jerry Baldwin is co-founder of Starbucks in Seattle, where he was the first roaster and coffee buyer – he is quick to add that started the company but has nothing to do with it’s current paths. Included in the article are parts from Corby Kummer’s “The Joy of Coffee” book, a very good read about Coffee having connoisseurs like wine and fine foods do which Jerry was also interviewed for.

Here are a few highlights from the article, but more detail can be found in the original post (link below).

If your morning cup came from a commercial roaster who included Robusta in the blend, there will be another level of complexity. Caffeine content in these coffees, per one study, varied between 1.16 and 4.0%. A straight 12 oz. cup, using 20 grams of the 4% coffee, probably wouldn’t taste very good, but would definitely provide more buzz: 800 milligrams of caffeine!

As we find with anything… they more you research the more you learn that there is much more than can be learned quickly. A few generalized thoughts:

• Arabica averages about half the caffeine as Robusta.
• The cultivar determines the caffeine content.
• Degree of roast has no meaningful effect on caffeine.
• An espresso made from 100% Arabica, on average, has about 70 milligrams of caffeine per shot; a 12 oz. cup of drip coffee made my way in a press pot, using two scoops of coffee per 12-ounce cup — would have 200 milligrams. 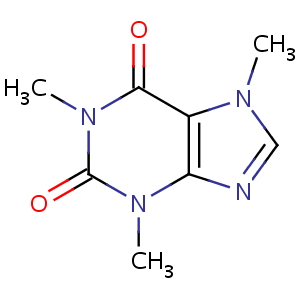